It seems Benedict Puglisi was born to be a Luthier. The son of Sicilian and Irish descendants, he grew up in a household where music and art were held in highest esteem.

Puglisi di Sicilia. From the early 1800’s to the present day the name has proudly been associated with stringed instrument building. Violins, violas, cellos, Double Basses, guitars and mandolins can be found throughout the world bearing this name. The early half of the 19th century, was a period when th

e Puglisi Sicilian school instrument makers grew to be one of the most prolific in southern Italy.

A common thread that is consistent with all the Puglisi instruments is the use of the family symbol the ‘ant ’(formica).

Representing a strong hard working community where everybody is striving for the same ideals. This is a symbol that Benedict has carried through to all his instruments and work to this day.

Initially raised as a musician, learning the double bass, electric bass and guitar vocals he began his formal study of music at Box Hill College, Melbourne, and later LaTrobe University where he studying composition, contemporary music the physics of sound. Mixed with his keen interest in his European heritage, it formed the catalyst for the Maker he is now.

Entereding the field of Luthiery in 1988, and obtaining a 6 year apprenticeship

with violin maker John Ferwerda, a Mittenwald School graduate he was strictly trained in all aspects of Luthiery

Travelling  overseas where he worked and studied with influential makers and teachers. This included  in Juliet Barker’s workshop Cambridge UK.  Returning to Australia, opened his own workshop, Atelier Puglisi. 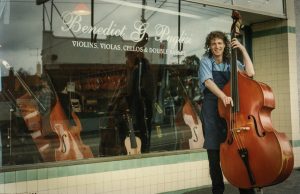 which has continued to expand, from its early days above a Hawthorn delicatessen, to the large, busy workshop that exists today.

Over the years, Benedict has gained significant expertise and has achieved some noteworthy distinctions.

Demonstrations and lectures at National and International events,

Benedict has also worked in a  team three times led by master maker Frank Ravatin at the Adelaide International Cello Festival, each time producing a communal  master cellos in under ten days.